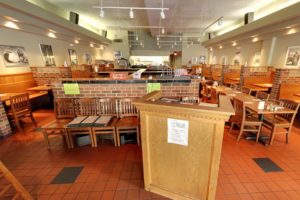 Faccia Luna, one of Clarendon’s oldest restaurants, is touting itself as a destination for young love.

Readers of Washington City Paper recently voted the neighborhood joint ‘Best Pizza’ in the paper’s annual Best of DC series, and the Wilson Blvd restaurant used that as an opportunity to highlight its apparent propensity for being a spot for successful first dates.

Together with Faccia Luna locations in Alexandria and State College, Pa., co-owner Joe Corey says he has talked to at minimum 300 couples who had their first date at Faccia Luna and eventually got married. At least five couples whose relationship started at Faccia Luna returned to the restaurant to propose, and two more have held their wedding receptions there.

“We always knew about it — we would talk to our customers, and every week we would find one or two new couples who had had their first date here,” Corey said. “This is something to be proud of.”

About a year and a half ago, after years of hearing stories of first dates leading to marriages, Faccia Luna began officially documenting the trend, via a continuously updated Word document.

Faccia Luna Trattoria’s Arlington location is 23 years old; the restaurant’s first location opened its doors in State College, PA in 1989. Corey describes Faccia Luna as a homegrown restaurant and attributes its longevity and success as a neighborhood institution to its “commitment to quality, coupled with an upscale, urban design.”