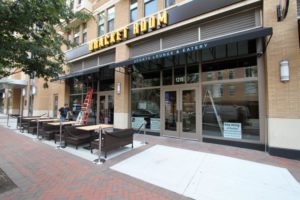 The Bracket Room (1210 N. Garfield St.) is revisiting its plan to bring live music — and some nearby residents are not happy.

The sports bar applied for a live entertainment permit to have up to two acoustic music players in the bar from 8 p.m. to midnight Sunday to Thursday, according to the County Board agenda. County staff recommend that the permit be approved with a review in November.

Residents who live in the Lyon Place at Clarendon Center apartment building, which has rooms above the bar, and across the street at Station Square want the Board to deny the permit. Residents are claiming the additional live music will bring more guests and more noise, which is already a problem, neighbor Joe Morrell said.

Morrell lives in the Station Square building across the street, and while he does not hear noise from inside the bar, he says there are often swells of people outside the bar and there have been fights. Live entertainment will only add to the noise, he said.

Part of the problem is the bar’s location, Morrell said, which is “essentially located in a residential building.”

“It’s not like it’s something like Mad Rose [Tavern] or whatever else is in a commercial building or on its own,” he said.

Morrell plans to attend the board meeting on Saturday to speak out against the permit. He’s not the only one. Other residents at the Station Square will be speaking out, Station Square manager George Pace said.

Pace attributed most of the noise affecting Station Square to the alleged fights and the crowd that hangs outside of the bar. He predicts that live music will only make the already crowded bar more popular.

The County has also received concerns from Lyon Place residents who live above the bar.

“As of the date of this report, staff has received several comments from residents of the apartment building who are concerned that there will be additional noise impacts caused by the proposed live entertainment. To address those concerns, the applicant has agreed to a condition limiting the proposed live entertainment to two (2) acoustical performers,” according to the agenda report.

According the report, The Bracket Room is aware of the concerns and agreed to making changes in order to reduce noise. Changes including limited performers to only two people and closing the doors and windows when there is live music.

The bar applied for a live entertainment permit in 2013 but withdrew after residents spoke out against it. At the time of the bar’s opening in 2013, the County received multiple noise complaints. However, they have only received one since March 2014, according to the staff report.

(ARLnow.com reached out twice to Jeff Greenberg, co-owner of The Bracket Room, but he did not respond.)

While staff recommended approving the permit, Pace said he does not believe the Board will allow live entertainment at The Bracket Room.

“I don’t think it’s going through again. I doubt it. I don’t know why the Board would change their minds after a year,” Pace said.