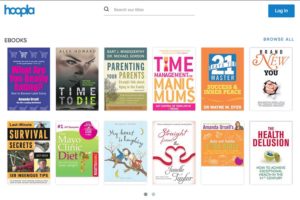 Library-goers may never have to wait for an audiobook again, thanks to a new Arlington Public Library partnership.

The library is working with an Ohio-based company called Hoopla Digital, which bills itself as a “free Netflix-like service” which users can access through their Apple TV, smartphone, tablet or laptop.

The library’s current contract with Hoopla gives library patrons access to audiobooks and music, according to library spokesman Peter Golkin, who described the partnership as the next logical step in adapting to new technology, something libraries have been doing for decades.

Golkin said one particularly attractive feature of Hoopla was the elimination of waiting lists. In the past, when libraries bought audiobooks, they would have to buy several copies — and even then patrons could end up waiting a long time for more popular titles. Through Hoopla, however, one title can be checked out by an unlimited number of patrons.

The company also touts its automatic returns, which it says eliminate library late-fees. Users will be able to check out up to six items a month and listen to them as often as desired. Due to record label restrictions, the same album may only be checked out twice in a 30-day period.

Arlington Public Library began using Hoopla last Tuesday (June 16), and is the 10th library system in Virginia to do so. To start using the service, patrons can create an account through the library’s website.