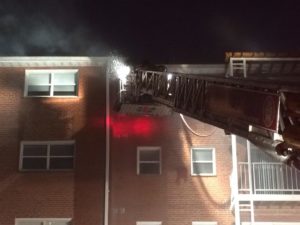 Firefighters battled flames near the roofline of the building, on the 1600 block of 21st Road N., starting around 9:00 p.m.

Smoke from the fire could be seen from several miles away.

As of 10:00 p.m. the fire had been mostly extinguished and firefighters were checking for hotspots. The residents from at least one apartment in the building are expected to be displaced by the blaze.

#Breaking: House struck by lightning on the 1600 block of 21st Rd. First arriving unit has reported smoke from the roof.

Update- Units have encountered fire due to the lightning strike and are working to locate and extinguish it now.

Update- Fire is in the roofline of the building. Units are working to open up the roof to get to the fire.

@ARLnowDOTcom 1600 blk of 21st Rd N. Companies did a great job keeping the fire to the area of origin. #GreatJob pic.twitter.com/V8rLucwbBO