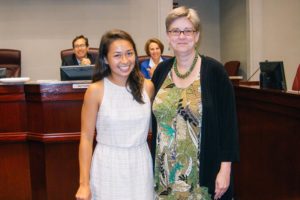 Last month the newly-minted University of Virginia graduate and long-time ultimate frisbee player was presented with the Callahan Award, issued annually to the most valuable collegiate men’s and women’s players in the sport.

In recognition of her award and her engagement with the local ultimate community, the Arlington County Board issued a proclamation praising Johnston at a meeting earlier this month.

To receive a Callahan Award, a player is evaluated on their offensive and defensive abilities as well as their sportsmanship. Likewise, Chair Mary Hynes explained that the Board’s June 16 proclamation was meant to highlight both Johnston’s formidable athleticism and her extraordinary leadership skills.

“We are here today to recognize the extraordinary achievements of Alika Johnston both on and off the ultimate frisbee field,” Hynes said.

According to the website Ultiworld, which also named her its 2015 Women’s Player of the Year, Johnston has been a core member of the UVA’s ultimate team (the Hydras) since her freshman year in 2011, and was instrumental in the team’s development into an “elite contender.”

“Johnston’s play has spoken for itself all season long… a lot of breath and ink used in the act of praising her prolific and relentless performance,” the website said. “On both sides of the disc, she’s been a top producer and drastically influenced the fate of her team. Opponents have most been forced to submit to her, going with the ‘stopping six other people is more likely than stopping her’ strategy.”

Johnston has been playing ultimate since her days at H-B Woodlawn and credits the school with some of her success.

“I am so grateful to H-B Woodlawn’s program for introducing me to the sport and making all of this possible,” she said. “I’ve been moved by the outpouring of excitement and support from Arlington’s ultimate community.”

Johnston has also dedicated herself to introducing a new generation of athletes to the sport. She serves as USA Ultimate’s Virginia Girls State Youth Coordinator, and works to grow the sport through clinics, events and mentoring young players.

Arlington’s youth ultimate programs have grown rapidly in the past several years, as the sport becomes increasingly popular across the country. Opportunities to play can be found through the Youth Ultimate League of Arlington.

END_OF_DOCUMENT_TOKEN_TO_BE_REPLACED

More Stories
The Courage Wall Is Coming to BallstonLegal Insider: An Employee’s Right to Final Paycheck