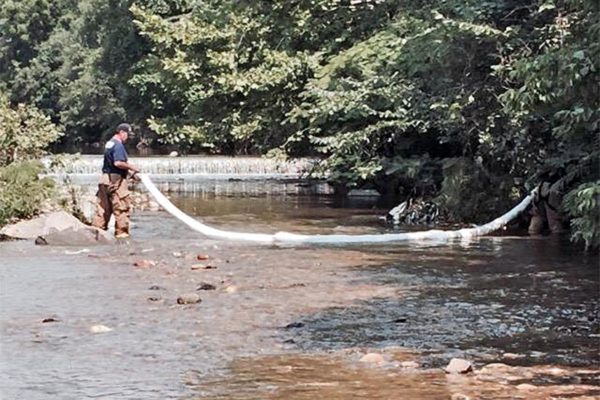 Arlington County is warning people and their pets to avoid the waters of Four Mile Run below S. Walter Reed Drive, for now.

An unknown petroleum product was discovered in the stream this morning, just before 11 a.m. The Arlington County Fire Department’s hazardous materials team used booms to try to contain the spill, while firefighters and the county’s Dept. of Environmental Services investigated the source.

The size of the spill has not been determined and authorities are warning against making contact with the contaminated water, particularly at the nearby Shirlington dog park.

“The public is advised to stay away from the affected water and to keep pets away until further notice, to eliminate the risk of exposure to petroleum products in the stream,” the county said in a press release. “People should not fish in the stream or have any contact with the water – including wading or swimming – until further notice from the County. The advisory to avoid all contact is considered an extra precaution to allow the effect of the discharge to be diminished by natural flushing of the streams.”

The fire department, meanwhile, has been tweeting about the incident.

@MrAndersonELA product was coming from a culvert draining into the creek. Probably originated from being dumped or washed into a manhole.

Update- Although contained, residual product is still in creek. Dogs and their owners should avoid being in the creek until further notice.