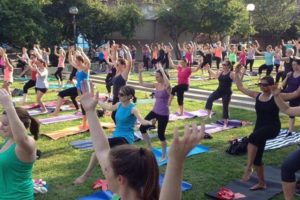 The remaining Barre in the Park classes in Rosslyn have been rescheduled from Wednesday to Thursday evenings, starting this week.

Barre in the Park, which is in its second season, is a series of free outdoor classes offered weekly in Rosslyn’s Gateway Park (1300 Lee Highway) by exercise studio Lava Barre, in partnership with the Rosslyn Business Improvement District.

(Barre is a type of trendy exercise class that combines elements of ballet with yoga and Pilates.)

Lava Barre is offering this free series in part to promote their new studio in Rosslyn (1528 Clarendon Blvd), which opened this summer. The Rosslyn studio replaced a Lava Barre studio previously located in Clarendon.

The series started in May and is slated to continue into the early fall. Although the classes are free, registration is required. According to Lava Barre, all registered participants need to bring is themselves, a towel or mat and some water.

Absent cancellation due to inclement weather, the remaining Barre in the Park classes will be offered Thursday evenings in Gateway Park from 6-7 p.m. Should a class be cancelled due to weather, the BID says a notification will be sent to those registered for the class via email.

Currently, classes are planned to continue from now until the end of September.