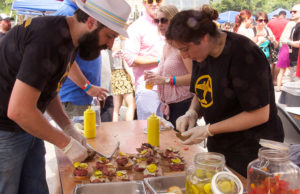 Arlington residents to should start building up an appetite. The third annual D.C. BRGR Bash is coming to Rosslyn’s Gateway Park on Saturday, July 18.

The BRGR Bash is a six hour competition of who can make the best burger, and the judges are the visitors. Each person at the bash gets to try four burgers and then a cast his or her vote for favorite burger.

There will also be craft beers to help wash down the burgers and live music to jam to while eating.

At the end of the day, one burger chef champion will be named, and he or she will walk away with a vacation to Austin, Texas and the Golden BRGR Bash trophy.

The competition runs from noon to 6 p.m. on July 18, and tickets are $29 per person. A ticket gets a person entry and four burgers. The 16 burgers are broken down into four groups, and each ticket is for one group. D.C. BRGR Bash recommends bringing three other friends so that everyone can taste all 16 burgers. Craft beers are available for $5 at one of the four beer bars.

Vegetarians don’t have to be left out. The competition offers a Veggie Burger ticket for $19, which gets the person entry and a veggie burger. There will also be cider for those with gluten allergies.

Arlingtonians can also attend the bash to support the four local competitors: Willow Restaurant in Ballston, Big Buns in Ballston, Citizen Burger Bar in Clarendon and the combined entry of Liberty Tavern and Lyon Hill in Clarendon.