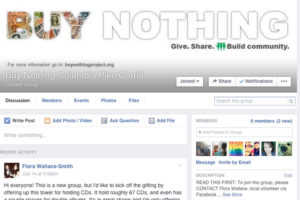 Flora Wallace had a typical problem for a newly married woman who just moved to a new home. She had many items that she didn’t need but were still in good shape.

Wallace then heard about the Buy Nothing Project, a gift-giving economy where neighbors give away items for free, from her cousin. She decided to bring the project to her neighborhood on Columbia Pike.

“I like the idea of being able to get in touch with a neighbor and give a new home to an item I didn’t need,” Wallace said.

Wallace contacted the administrators of the national Buy Nothing Project who helped her set up the Buy Nothing Project Columbia Pike Corridor group on Facebook. The idea behind the project is to create hyperlocal groups where neighbors can post items they want to give away or post requests for items people might have — and form tighter-knit communities.

“Time and again, members of our groups find themselves spending more and more time interacting in our groups, finding new ways to give back to the community that has brought humor, entertainment, and yes, free stuff into their lives,” says the project’s website. “The Buy Nothing Project is about setting the scarcity model of our cash economy aside in favor of creatively and collaboratively sharing the abundance around us.”

Each group is hyperlocal for areas with less than 50,000 people, meaning that only people in the specific group’s ZIP code can join. Columbia Pike residents in the 22204 ZIP code can join by requesting to Facebook group. Wallace will then contact them and ask for proof of residence before allowing the person to join, she said.

While the Buy Nothing Project helps people find new homes for their items, the project also allows people to connect with neighbors, something Wallace hopes to achieve, she said.

“The focus of the project is getting neighbors to know each other,” she said.

So far the group is small with eight members, but Wallace said she hopes it will grow as more people hear about it. Her goal is to have about 150 members in the next six months.

She has had requests from people outside of the ZIP code, and while she had to reject them, she said she hopes they start their own groups in their neighborhoods.

Wallace recommends residents of other parts of Arlington contact the national Buy Nothing Project administrators to start a new group. They can help a person start the page and go through all the rules that apply to the project, including how posts should be written, how to approve members, etc.

Wallace said she can see people creating a Buy Nothing Clarendon or Buy Nothing Courthouse, as examples. After all, the project helps people meet each other.

“By re-homing items in your community, you get to know who lives there,” she said.

Wallace posted the first item on the group — a CD tower. While no one has taken her up on the offer, she said she thinks it will happen as more people join the group.

“My goal is to find homes for items I might grow out of in the next years and definitely to meet new people,” Wallace said.