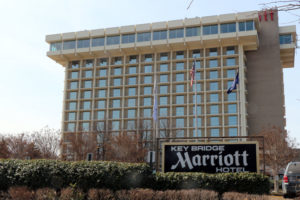 At least one department within Marriott held a staff meeting Monday in which employees were told that the company is indeed planning to move, with the requirement that it move to a Metro-accessible location in the D.C. area, a source tells ARLnow.com. That would suggest that there won’t be a repeat of 1999, when Marriott toyed with the idea of moving to Fairfax County but ended up staying in its current Montgomery County campus when Maryland offered a $58 million incentive package.

This time around, Marriott plans to have Maryland, Virginia and D.C. all compete for the headquarters, we’re told. Marriott’s current lease expires in 2022.

Arlington Economic Development officials think history may be on their side in its effort to woo the Fortune 500 company and its 2,000 employees.

“Arlington was the site for Marriott’s first motor hotel in the 1950’s, and as such we are eager to present our compelling business story to the Marriott team,” said Christina Winn, director of the Business Investment Group at AED. “Arlington is home of numerous global headquarters such as the 357,000 square foot expansion of Corporate Executive Board and the recent announcement of 217,000 square feet for Lidl’s U.S. corporate headquarters, and Marriott would be a welcome addition.”

Officials feel Arlington is well positioned to capitalize on the shift from increasingly out-of-fashion suburban office parks — of which Montgomery County and Fairfax County have plenty — to walkable, transit-accessible and amenity-rich urban areas.

Also planning a move out of its suburban office campus is TEGNA, the recently spun-off broadcast and digital arm of USA Today publisher Gannett.

TEGNA announced today that it has agreed to sell its Tysons Corner headquarters for $270 million and is now embarking on a search “to find the most appropriate space to meet our company needs.” Could that be Arlington?

It’s early in the process, but the county will be able to play the company history card again: Gannett was based in Rosslyn until 2001.