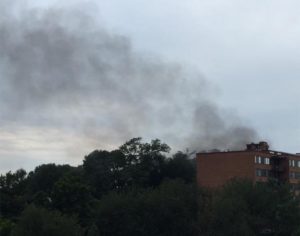 Update at 2:20 p.m. — The scene is being cleared and nearby roads are being reopened.

Firefighters are on the scene of downed wires and a car fire near the intersection of Lorcom Lane and Lee Highway in Waverly Hills.

A high voltage line came down on top of six cars around noon, according to Arlington County Fire Department spokeswoman Lt. Sarah Marchegiani. At least one of the cars caught fire and smoke from the blaze could be seen from as far away as Ballston.

Video (below) show the smoke and fire coming from what appears to be a small parking lot next to an apartment building.

It’s unclear if anyone was inside the cars when the power lines came down, but no injuries have been reported. No word yet on what caused the wires to come down.

Firefighters were unable to douse the flames with water due to the live wires, Marchegiani said. A Department of Defense foam tanker was dispatched to the scene in order to extinguish the fire, according to scanner traffic.

A Dominion Power crew has arrived on the scene and will be working to shut off power to the lines.

Northbound Lorcom Lane is currently closed between Old Dominion Drive and Lee Highway due to the fire department activity. Police are planning on closing two lanes of Old Dominion at Lorcom, according to scanner traffic.