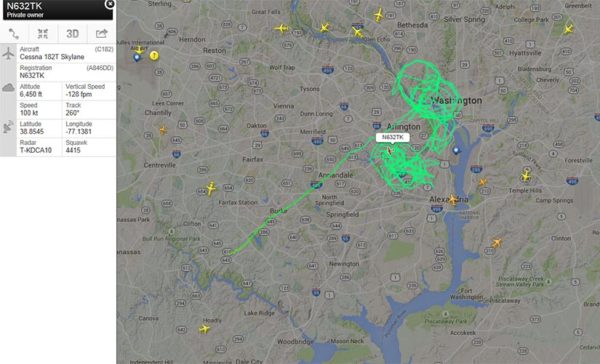 A small prop plane was flying circles over Arlington, Alexandria and D.C. yesterday, and one tipster says it was probably an FBI surveillance plane.

The Cessna 182T Skylane plane was tracked by the website Flightradar24, flying around parts of Arlington. The Associated Press reported last month that the FBI uses that exact model of plane, equipped with high-resolution video cameras and cell phone trackers, to conduct surveillance flights over U.S. cities.

“I stumbled on [the website] yesterday and much to my surprise there was one of those planes flying over Arlington,” said the tipster. “Just thought others in Arlington would be curious to know it is happening here as well as all over the country as the AP points out.”

The Washington Post reported in May that a Cessna 182T, registered to a company in Bristow, Va., was tracked flying over Baltimore during the Freddie Gray riots.

ARLnow.com has fielded occasional questions from readers over the past year or so about small aircraft seen circling overhead. The flights have struck readers as odd because with few exceptions FAA regulations limit aircraft flying over the immediate D.C. area to government aircraft and flights arriving and departing at Reagan National.

There are instances, however, when the FAA allows commercial general aviation flights over the restricted air space for aerial photography or research purposes.