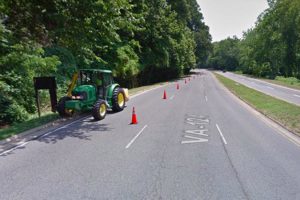 The National Park Service this week is beginning a project to repave Spout Run Parkway.

The two-month project will result in lane closures and rush hour delays between the GW Parkway and Lorcom Lane.

From an NPS press release:

George Washington Memorial Parkway (GWMP) will begin a roadway project on July 27, 2015, which is expected to last through late September, along Spout Run Parkway in both directions between GWMP and Lorcom Lane. The project will also include work on the southbound GWMP ramp to Key Bridge, and Rosslyn Circle Ramp onto northbound GWMP.

Throughout the 50-day project, motorists should expect single lane closures for a period of up to 10 days per lane in order to mill and overlay the road and replace the guard-rails. No detours will be in place, so please plan accordingly for delays, especially during rush hour. Every effort is being made to complete the work in a timely manner and minimize traffic delays.