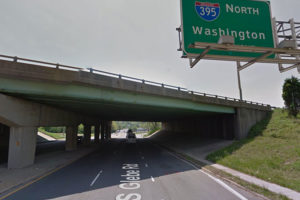 Arlington residents will have a chance to ask questions and weigh in on upcoming repairs to the interchange of I-395 and Glebe Road.

Virginia Department of Transportation will hold an open house tonight (Tuesday) from 6:30-8:30 p.m. at Gunston Middle School (2700 S. Lang Street). Attendees will hear from VDOT staff and have an opportunity to ask questions about the anticipated construction.

The roadwork on the three bridges at the interchange is anticipated to begin in April or May 2016, said Brian Morrison, a senior structural engineer with VDOT.

Construction is anticipated to last about four to six months, so the project is predicted to be finished in October or November of next year, Morrison said.

Roadwork on the bridges is expected to include repaving the bridge decks, guardrail improvements, reconstruction of bridge joints, painting bridge beams and fixing the sidewalks and curbs on Glebe Road. The total cost for the project is projected to be $4.7 million, according to VDOT.

The project is currently in its design phase. Once construction begins, there will likely be single-lane and shoulder closures during the night and day, according to VDOT’s website for the project.