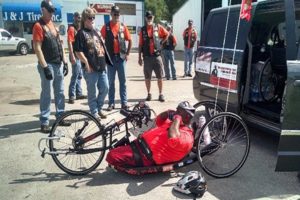 For much of this summer, combat-injured Marine veteran and double-amputee Toran Gaal has been on a cross-country cycling trip to Arlington.

On June 1, Gaal set off from San Diego on his “Ride Across America,” an almost 4,000 mile trek which he will complete entirely on a hand-cycle.

Gaal embarked on the journey to raise money and awareness for the Semper Fi Fund, the charity that helped him recover after he was severely injured in an IED explosion in Afghanistan in 2011. Following the explosion, Gaal was comatose for two months and lost both legs and part of his hip.

“[The Semper Fi Fund] is doing so much good for every branch,” said Gaal. “I wanted to pay it forward to the next generation.”

Gaal will have been on the road for 65 days by the time he’s expected to arrive in Arlington this Sunday, Aug. 2. He will have stopped in close to 50 other towns and cities along the way. At the end of his ride, he will place a wreath on the Tomb of the Unknowns at Arlington National Cemetery.

Brian Riley, fellow combat-injured Marine veteran, is accompanying Gaal on the road in a support vehicle.