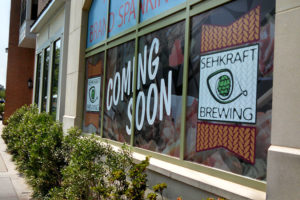 Sehkraft Beer Garden and Haus, a new brewpub near Clarendon from the owners of the Westover Beer Garden, is looking to open its doors before baseball season is over.

The beer garden’s goal is to open its new location at 925 N. Garfield Street by the end of August, said owner Devin Hicks. The pub will definitely be open by mid-September “in time to watch the Nationals kill it in the playoffs and hopefully watch the Redskins be competitive,” he said.

Sehkraft’s 10-barrel brewing system is currently being installed in the establishment, Hicks said. Once open, the beer garden will have five beers flowing from the tanks and five house brews in kegs. The bar will also feature 30 “guest” beers from other breweries for its taps.

Sehkraft will collaborate with a number of local and national breweries, Hicks said. The first is a collaboration with Adroit Theory, a brewing company based in Purcellville, Virginia. The brew, an Imperial Gose, will be one of the first distributed at the bar.

“We definitely are excited to showcasing the several fantastic local breweries in the area,” Hicks said.

Head brewer John Peters also plans to collaborate with Sierra Nevada Brewing Company. Growlers will also be a big part of Sehkraft Beer Garden, and customers will receive discounts on growlers if they use the bar’s Portland Growlers, Hicks said.

The establishment will also be home to a butcher shop. Customers will be able to buy cuts of meat to take home from the shop, which will also serve as the bar’s kitchen.

In addition to the beer and food, the venue will be a home for live music. Hicks is working with a booking agent to attract local and regional bands to perform at the bar.

The bar received its entertainment permit from the county last November, but it does not allow the venue to open its windows or doors. Sehkraft plans to have outdoor seating but guests will have to stay indoors if they wish to hear the music.