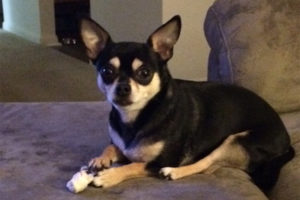 A local law enforcement officer has turned to the Internet in hopes of raising money for her dog’s surgery.

The officer, whose first name is DeDe, set up a GoFundMe campaign with a goal of $800 to cover the medical expenses of veterinary knee surgery. (Ed. note: officer’s last name has removed due to safety concerns.)

Smyth, a 6-year-old Chihuahua, injured his knee while jumping off of a bed to get a toy stuffed monkey, DeDe said. The injury is common for small dogs.

Smyth can still walk, but the veterinarian recommend limiting his movement to stop him from hurting his knee more.

“Despite his injury, he continues to be a loving little dog that keeps trying to play with his brother and neighboring dogs,” says the fundraising page. “Smyth is in need of a surgery that I am unable to fund at this time to repair his patella luxation. I don’t want my little guy to suffer, while I’m trying to save up the money. Any donation help my little guy get back to his fun playful little loving self.”

The surgery, anesthesia and pre- and post-operation care total $800, she said. During the procedure, Smyth will also have to get a heart echo to determine if he has a heart murmur.

“My concern is his treatment being prolonged by trying to raise the funds,” DeDe said. She said she’s usually a private person but is going public with this in order to speed up the treatment.

A couple years ago, her other dog, a Chihuahua named Wessin, had to have a similar surgery on both knees. DeDe said has a special connection with Smyth, who can pick up her moods and try to make her feel better.

“I’d never admit this to the other one [Wessin], but he’s my favorite,” DeDe said.

DeDe did not want the police agency she works for named because she’s raising funds as a private individual and not as a representative of the department.