Just inside the Washington, D.C. border and a few blocks south of the Takoma Park Metro station sits 3 Stars Brewing Company. Founding homebrewers, Dave Coleman and Mike McGarvey, had a vision “to make this world-class city a world-class craft beer destination,” which has led them to craft some of the most creative brews in the metro area.

Beers with descriptions like Berliner-style rye or raspberry porter or any one of their saisons — Citra lemon peel, cranberry, rye or peppercorn — have made the 3 Stars name synonymous with experimentation. That this curious exploration of flavor combinations has also led to success isn’t surprising when you try their beer. They were named D.C.’s Best Local Brewery two years in a row by the Washington City Paper, Rising Stars in 2014 by Star Chefs Magazine and, most recently, Thrillist listed 3 Stars as the best brewery in D.C.

Not content to stick with conventional and established styles, 3 Stars claims to have brewed “more than 40 different distinctive beers.” The vast majority of these have only been available on draft and often only at 3 Stars, or occasionally in bombers. But earlier this summer 3 Stars partnered with River City Cannery, a mobile canning machine, to offer some of their beers in 4-packs of 1 pint tallboy cans.

Two of the following beers are available in the tallboys, White Ghost IPA and Lemon Citra Saison. The other two are available in bombers. According to an article on DCist, there are plans to can their double IPA, Two To the Dome and Above the Clouds, their farmhouse pale ale. The future certainly looks bright for 3 Stars.

Peppercorn Saison sits a top a unique set of saisons and farmhouse ales that 3 Stars makes. Despite the name, this beer is a subtle and straightforward saison. The aroma is appropriately dominated by banana — yeast used to make saisons is a Belgian strain that creates aromas and flavors of tropical fruit and banana. Fruitiness defines the flavor, moving from a pleasant sweetness to a refreshing tartness in the finish. Despite having a “season” — early spring — this saison is delicious year-round. 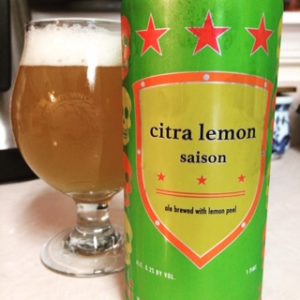 The first of the two canned beers to come off the line, Lemon Citra Saison comes off as a tart version of a saison. This beer isn’t technically a sour, but its tartness puts it in an interesting in-between category. The aroma is of lemonade and water cracker with some banana as it warms up. As the name suggests, lemon is the first thing you taste, complete with all its tartness, but the malt kicks in bringing a sweetness to offset it. Despite the refreshing tartness, this beer can be enjoyed all spring and summer and into the fall. 3 Stars chose well by canning this one. 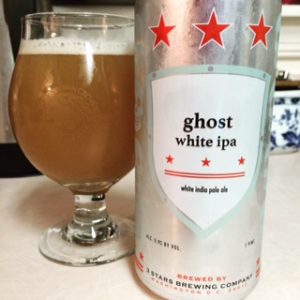 A white IPA is a beer that combines the high hop quantities of an India Pale Ale with a Belgian-style white beer or wit beer. Wit beers typically include a portion of unmalted wheat in the grain bill, which accounts for the cloudy appearance of the beer and therefore the name. Ghost’s aroma is of light hops and biscuit. The flavor is surprisingly complex, with a hop bitterness that grows as you swallow and a sweetness that develops in the background from the malt. I’ve had this in winter (on draught) and in the summer which has proven it’s great anytime. 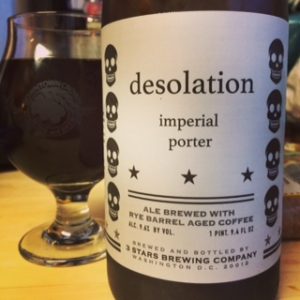 Though Dominion Wine & Beer does not yet carry this beer — they plan to offer it as soon as they can — I couldn’t leave it out. Thrillist even name-dropped Desolation in their “Best Craft Brewery in Every State” article. It’s worth a look and worth looking for. This beer is delicious, strong and drinkable. The aroma is an enticing mix of sweet black coffee and toast. In your mouth, the flavors mingle: a dark chocolate bitterness from the black patent malt and the big sweetened iced coffee. The alcohol is apparent in the sweetness, but not in any obtrusive way. The nearly black appearance suggests an imperial stout, but, being a porter, this still has a relatively light body. All in all, this bomber is not one to take lightly — it’s strong without overpowering and it’s delicious.

In other beer news, The Beer Institute recently released interesting data regarding the economic impact of the beer industry. Altogether, more than 2,800 breweries (macro and craft) contribute nearly $253 billion to the U.S. economy. That amounts to 1.5% of the U.S. gross domestic product (GDP). Breweries and beer importers also employ nearly 50,000 people across the country.

“It can be said that beer truly serves America. Beer is more than our nation’s favorite adult drink – it is a powerhouse in job creation, commercial activity and tax revenue,” said Jim McGreevy, president and CEO of the Beer Institute, which released the study jointly with NBWA.

Go find some 3 Stars beer, if you haven’t already, and let us know what you think. Cheers!