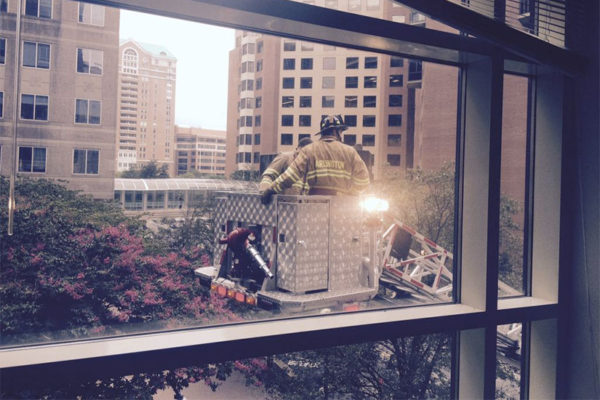 A cat was rescued from a high ledge in Ballston this morning.

The rescue took place around 9 a.m., several stories high at the Avalon Ballston Square Apartments (850 N. Randolph Street), after the cat had walked down a ledge from an apartment balcony and its owner was unable to reach it, according to Arlington County Fire Department spokesman Lt. Brian Edwards.

Firefighters used a ladder tower to pluck the cat from the ledge without incident, Edwards said.

Edwards couldn’t recall the fire department’s last cat rescue. He noted that “we don’t get a whole lot [of cat rescues] but there are a few throughout the year.”

You've heard of rescuing cats from trees, what about off a high-rise? Good work Tower 4, Engine 2 & @AWLAArlington pic.twitter.com/XKf87mnpeY