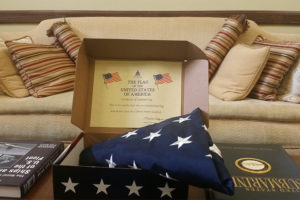 An American flag that once flew over the U.S. Capitol will replace a missing flag at the American Legion post in Virginia Square.

Sen. Tim Kaine (D-Va.) gifted the post at 3445 Washington Blvd with the flag after reading that its previous flag was missing and possibly stolen, as first reported by ARLnow.com.

“While on the road along Route 58 today, I read that the U.S. flag at American Legion Post 139 in Arlington had gone missing,” Kaine said on Facebook. “I asked my staff to see if we could help. I hope they enjoy this new flag which was flown over the U.S. Capitol!”

“After reading story, he wanted to see if there was something he could do,” LaPaille said.

The flag will be raised tomorrow with an accompanying ceremony, said Sharon Walker, the club manager at the American Legion.

“It was so generous of his office,” she said.