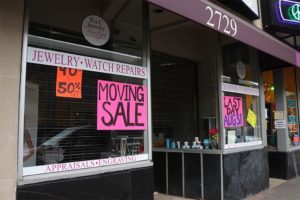 The B&C Jewelry Boutique in Clarendon will close its doors on Aug. 31.

Owner Nolan Forness, who owns the store with his wife, daughter and son, said that they wanted to go back to owning two stores instead of three. The company has two other stores in Alexandria.

The Clarendon store also received less foot traffic than the two Alexandria store, he said. He declined to comment more about the closing in order to stay in good standing with his landlord.

“We’re happy that people come to visit us here and we’ll see them in Alexandria,” Forness said.

The Clarendon branch of B&C Jewelers opened in December 2012.