(Updated at 10:05 a.m.) A video on Reddit shows a man allegedly stealing a bike from a porch of home on Key Blvd in Lyon Village.

The video was originally uploaded last week but was posted on a Reddit thread yesterday, with the comment that the thief had not been caught as of that morning.

The video, captured by a home security camera, shows a man with long hair and wearing a backpack, short sleeve graphic t-shirt and pants and sneakers. The camera catches him glancing at a window in the house and then sneaking up the porch. He then walks off the porch with a bicycle. 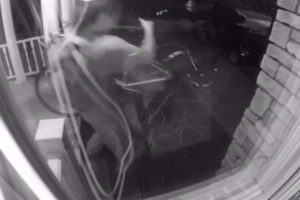 Redditor biikesnow, who reposted the video, said on the thread that it is not his/her video or bike.

“Took this video from the listserv. I have seen numerous bikes left on porches/children’s bikes left on front lawns overnight around the neighborhood. Hopefully this video proves that no neighborhood is invincible to theft and that everyone should lock up (if for some reason you decide to leave your bike outside),” the poster said.

Asked about the video, Arlington County Police Department spokesman Dustin Sternbeck said: “We did receive an online report, however, this was the first our detectives had seen the video.”