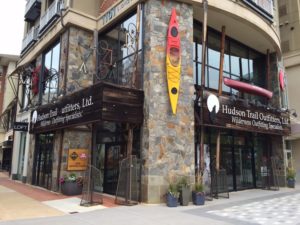 Hudson Trail Outfitters, the venerable local outdoor retailer, will be closing its stores, including one location on Pentagon Row in Arlington.

The Maryland-based company, which has four D.C. area stores, announced today that it will begin winding down its operations after nearly five decades in business.

Among the stores set to close are locations in Fairfax, Rockville, Tenleytown (D.C.) and Pentagon City, the latter of which is at 1101 S. Joyce Street on Pentagon Row.

The Pentagon Row store was open as normal today. Employees said they had not yet been told when exactly the store would close.

It is with a heavy heart that I must inform you that after nearly fifty (50) years in business, HTO will be closing its remaining four stores and shutting down the business.

HTO has been an institution in the DC Metro Area since 1971. From day one the mission was simple: open a store that sells the greatest outdoor gear and apparel on the planet, hire only those who love the outdoors and who are passionate about health and happiness, and provide Positively Outrageous Customer Service to everyone. The retail landscape has changed so much within the last 36 months and the Company has decided that the time has come to begin to ‘wind down’ all company affairs, knowing that it never had to compromise any excellence standards on behalf of the community.

The community and the Company have always supported each other with such dignity and respect, and the Company will always be proud of the role that it played in helping to improve the lives of literally hundreds of thousands of people, employees and customers, within the DC Metro Area. During this transition, all customers and all employees can count on continued excellence and pride from all associations with the Company. HTO firmly believes that an orderly wind-down of affairs provides the best opportunity for professional closure and maximum success and efficiency in what are otherwise sad and nostalgic circumstances.

The Company wishes to thank all of its customers and team members (past and present) for nearly five (5) decades of committed loyalty, high standards, professionalism, association, trust, support, partnership…and most importantly…. friendship. And what a ride it has been – who would have ever imagined that Ground Zero for what is now internationally known as Specialty Active Outdoor Retail was going to be Kensington, Maryland, or, that a passionate and creative outdoorsman from Washington, DC would one day grow up to both pioneer an entire industry, and, to become the example and trend setter for how that industry would grow and evolve for nearly half of a century?

In advance, thank you for your continued support during this transition.