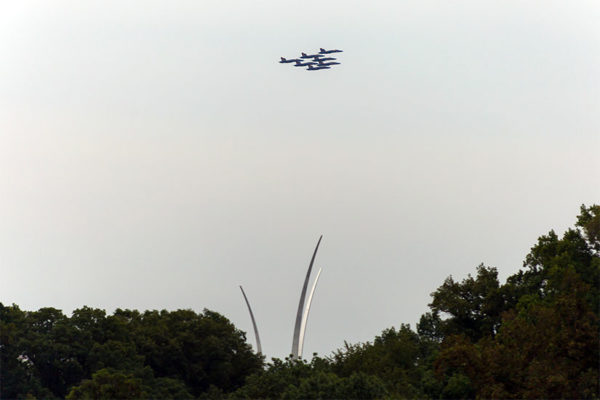 W-L Student Dies — The Washington-Lee High School community is mourning the death of Juliana Clarkson, 14, who died on Friday after a battle with leukemia. Fellow W-L students and crew teammates have filled the N. Stafford Street bridge with chalk tributes to Clarkson. [Legacy, Vimeo, Team in Training]

Man Wins Lottery, Decks Out Rosslyn Condo — Brian McCarthy, 29, won $68.4 million in the Virginia Mega Millions lottery four years ago, and has spent part of his winnings turning his Rosslyn condo into the ultimate bachelor pad. Among the accoutrements are a custom LED chandelier in his 20-foot-tall living room, a 300 gallon fish tank that simulates ocean waves, a TV in his bathroom mirror and a private roof deck with a grill and a glare-free outdoor TV. [Washingtonian]

What’s Next for Arlington’s Millennials — As the oldest of the millennial generation start having kids and raising families, many may end up moving out of Arlington to locales with lower housing costs. Arlington, however, is studying the reasons why people move out and is contemplating new housing options to help others to stay. [Washington Post]

Finalists for Elementary School Site — A working group has narrowed down the list of potential sites to build a new elementary school in South Arlington to 11 options. Those options include existing school campuses, parks, community centers and two privately-owned sites. [InsideNova]

Bar Owner Makes Brief ‘Bachelor’ Appearance — Chris Bukowski, co-owner of the Bracket Room sports bar in Clarendon, made a brief and ignominious appearance on ABC’s “Bachelor in Paradise” last night. Bukowski, who has appeared on four other seasons of The Bachelor and its spin-off shows, proceeded to get drunk after arriving in paradise, failed to find a suitable date, and then walked off the set, dejected. [People]