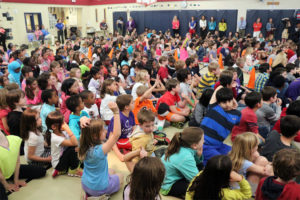 APS’ PreK-12 student enrollment was 25,307 at the beginning of the school year, up from 23,179 at the time last year, according to figures cited by Superintendent Dr. Patrick Murphy at a School Board meeting last week.

APS had 2,636 teachers employed on the first day of school this year, up from 2,493 last year. APS said it hired 387 new teachers over the summer, to keep up with enrollment and teacher retirements.

Meanwhile, APS continues to utilize trailer classrooms to accommodate the additional students, while planning and building new schools and additions to existing schools. The new Discovery Elementary next to Williamsburg Middle School opened its doors to students for the first time last week.

Next Monday, the Arlington County Board is expected to vote on use permits that would allow a 30,000 square foot addition to Abingdon Elementary School, in Fairlington. The addition, which is expected to cost up to $29 million, would provide space for an additional 136 students, bringing enrollment capacity to 725 from 589.

Some Fairlington residents, however, have expressed opposition to the plan.

“The plan is extend the school toward a steep hill that is home to fox, deer [and] raccoons which means knocking down 125 trees (77 of which they say are dead — which is also home to the aforementioned),” one resident said in an email to ARLnow.com over the weekend.

A community meeting on the plan is scheduled from 7-9 p.m. tonight, at the school.