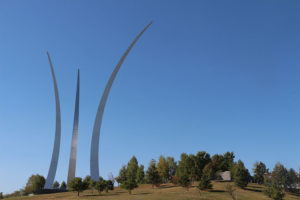 The Capital Weather Gang may have declared summer over in the D.C. area, but National Weather Service’s predictions for this weekend look pretty summery. NWS expects a high of 86 degrees for Saturday and a high of 78 degrees on Sunday.

One way to enjoy the beautiful weather may be a trip to the Air Force Memorial, located off of Columbia Pike, to say happy birthday. The Air Force turned 68 years old this week.

This morning you may have seen or heard fighter jets flying over parts of Arlington. The Air Combat Command, which is part of the Air Force, flew two F-22 aircrafts at approximately 9:10 a.m. over Arlington National Cemetery and two F-15C planes over the Pentagon around 10:40 a.m.

Arlington’s future may look a little more affordable, at least in terms of housing, after the County Board meeting on Saturday. The Board will take up the Affordable Housing Master Plan during their meeting first meeting since July. Under the plan, the county will add approximately 15,800 affordable housing units by 2040.

At least two groups from South Arlington have organized in response to the housing plan. While both groups support adding more affordable units, the Coalition of Arlingtonians for Responsible Development has been lobbying the Board to include more geographic distribution of affordable units. New group, Mi Voz Cuenta, supports the plan as is and says it welcomes more affordable housing on Columbia Pike. Mi Voz Cuenta is allied with Virginians Organized for Interfaith Community Engagement, which supports affordable housing.

County Board candidates have also weighed in on affordable housing with Christian Dorsey and Katie Cristol announcing their support of the plan and independents Mike McMenamin and Audrey Clement saying they would not vote for it.

Feel free to weigh in on affordable housing or any other topics of local interest in the comments section.