Members of the Coalition of Arlingtonians for Responsible Development, a group that wants affordable housing throughout the county, protested before a County Board work session on the Affordable Housing Master Plan last night.

The Affordable Housing Master Plan calls for 17.7 percent of all housing in Arlington to be affordable by 2040 for those making up to 60 percent of the average median income. Under the plan, the county would add roughly 15,800 new affordable units.

“It’s housing for our low wage workforce, or our lower wage workforce,” said County Board member Jay Fisette after the work session. “It’s the people we all rely on and come across every day in our lives in Arlington.”

The County Board will vote on the plan in September, and CARD members said they do not think the plan does enough to spread affordable housing throughout the county. Instead, the group said that new affordable housing units will be clustered around Columbia Pike.

“I think the county can make a stronger commitment to placing CAFs [Committed Affordable Units] in school districts that don’t have a high concentration of poverty,” said CARD member Katherine Novello, who lives in Barcroft. 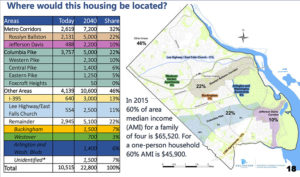 The plan includes a map that forecasts the distribution of affordable housing units throughout the county. By 2040:

Under the plan, no affordable housing units would be added to areas in the northern most part of Arlington, including the Bellevue Forest, Arlingwood, Old Glebe and Rivercrest neighborhoods.

Many of the CARD members are concerned that the lack of distribution throughout the county will hurt school achievement by clumping high levels of poverty in some schools, while others have very few students who need free or reduced meals.

“If you create pockets of poverty, you’re not creating opportunities for people to succeed in life,” said CARD member Sue Campbell, who lives in Glencarlyn.

The lack of diversity in some schools also goes against the county’s slogan of diversity and inclusion, Campbell said.

The County Board received many comments from the public asking for geographic distribution and urging the county to do more to ensure it, said County Board member John Vihstadt during the work session.

“I’m just looking at pages and pages of the comments looking at the survey [on affordable housing],” Vihstadt said. “We’re moving in the right direction. The question is what more can we do.”

Vihstadt said after the meeting that he thinks the plan is better than before and is hopeful that the final plan presented in September will be something he can support.

“I think this plan now has goals as well as some teeth,” he said.

CARD founding member Joye Murphy said this morning that while the County Board members, “especially John Vihstadt,” were listening to the group, the plan still does not do enough to enforce geographic distribution.

“The county continues to harp on ‘preserving’ affordable housing,” she said in an email. “The only place housing is ‘market-rate affordable,’ (this means ‘low rent apartments’) is basically along Columbia Pike. This thinly-veiled ‘goal’ of ‘preserving affordable housing’ means dumping more committed affordable units on the Pike. We are not drinking that Kool-Aid.”

END_OF_DOCUMENT_TOKEN_TO_BE_REPLACED

More Stories
Morning Poll: Will You Be Going Out of Town for Labor Day Weekend?Pet of the Week: Boogie