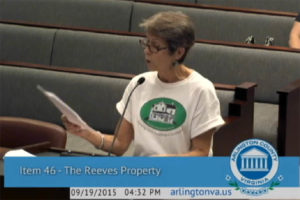 The two and a half acre of land where the Reevesland farmhouse sits was divided into two parcels — one which will contain the farmhouse and one that will become a public park.

The County Board’s decision allows the county to preserve the view of the farmhouse while still being able to sell it to a private party, Chair Mary Hynes said. The county also approved a permit to make the farmhouse a “unified residential development,” which makes it easier to sell, possibly as a single-family home.

Under the decision, the county manager cannot divide the land until directed by the Board, which extends the time for the county to hear proposals and decide what exactly to do with the farmhouse. The entire two and a half acre property will remain a local historic district, preventing major changes.

“The creation of a separate lot that includes the farmhouse would enable the County to market the house for sale to a private buyer willing to restore and maintain it,’ the county said in a press release. “The newly created lot is meant to give a potential owner privacy and the flexibility to expand the house with oversight by the county’s Historic Affairs and Landmark Review Board.”

Board member Walter Tejada was the only vote against the division of the property. He also voted against the sale of the Reevesland farmhouse in May.

Tejada made a motion to include a direction to the county manager that the land could not be divided until a path to the “historic milk shed,” which would sit on the piece of land made into a park, was made compliant with the Americans with Disabilities Act. County staff said it might not be possible to have an ADA compliant path within the three years, and the motion failed.

The Board voted to sell the Reevesland farmhouse property after deciding it could not put up the $2-2.5 million it would cost to renovate the building for public use. In order to keep the building as county property, Arlington would have to rebuild parts of the farmhouse to make it compliant with the Americans with Disabilities Act and modern safety codes, including strengthening the floors and updating the buildings utilities, Board Chair Mary Hynes said at a June board meeting.

Board member Jay Fisette voted against selling the parcel in May, saying he wanted more time to find a solution for the farmhouse.

“I will say that was primarily because I wanted more time to explore a nonprofit partnership that would allow continued public use. I have always been attracted to that idea and continue to be at that time,” Fisette said. “The proposal that we’re about to do today allows for that additional time, in fact, by not recording this subdivision plat until a later date.”

Separating the farmhouse and potentially allowing it to become a private residence allows the County Board to have a fall back plan, Hynes said.

“Here is this really unique [farmhouse], and we need to find a way to preserve that,” she said. “The view shed, the experience of seeing this farmhouse on the hill, to me, is the most important thing.”

Several citizens and neighbors spoke about their disapproval of the Board’s previous vote to sell the historic property, during the public comment portion of the Board meeting. They protested that the decision was too quickly made, and that before the land can be subdivided, the Board should return to that issue.

At the meeting, Sandra Spear spoke on behalf of the Reeves Farm Conservation Society, which incorporated just days before, on Sept. 16. The new organization grew out of a partnership between the Boulevard Manor Civic Association, Arlington Historical Society and Preservation Arlington but is independent of the three groups, Spear said.

“Our hope is to buy all three buildings on that property. And by restoring them to their condition in the early 20th century, we will be able to preserve them, we hope, in perpetuity, as the last operating dairy farm in Arlington. It turns out that the best way to preserve those buildings for public use and public access, is for them to go into private hands,” she said.

The Society wants to restore and preserve the farmhouse as a working and teaching center, Spear said, adding she hopes that the Reevesland Learning Center will support this cause.

“We are hoping not just to restore the historic buildings for public use, but also to adapt the garage to be used as a teaching kitchen and to add a pavilion or other accessory building near the garage,” she said. “We hope to use the buildings separately and together for educational and community uses and for rental to pay ongoing expenses at the property.”

Joan Horwitt, president of Reevesland Learning Center, another group that wants the farmhouse preserved for public use, said she identified “multiple serious procedural and substantive deficiencies” in the residential proposal.

“We should not allow this tainted unresponsive process to continue,” Horwitt said. “We oppose the unwarranted sale of the Reevesland farmhouse and parkland from the county to a private owner… more than 600 concerned citizens have signed an online petition calling on the County Board to reverse its nontransparent undemocratic 3-2 vote.”