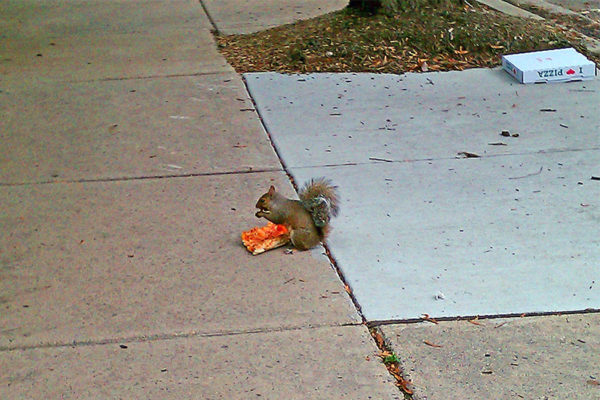 This week, a very determined rat that was caught on video dragging a slice of pizza down the stairs of a New York City subway station made viral headlines across the country.

Arlington now has its own version of the pizza rat.

Local resident Valerie Crotty says she spotted a squirrel (above) trying to bring a slice of pizza home with it. In lieu of a video, she relayed an eyewitness account.

“Well, he did not go to the Metro because the Silver, Blue and Orange lines were delayed,” Crotty said. “But, I did watch him drag the pizza into bushes on 16th Road so that I would not take it away from him.”

When one is used to scarfing down nuts all day long, a piece of pizza sounds like a nice change of pace that’s well worth the effort.