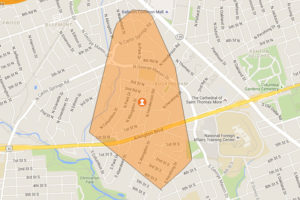 Nearly 1,500 Dominion customers are without power across a swath of north and south Arlington centered roughly around Barrett Elementary.

On its website, Dominion says it’s investigating the cause of the outage and hopes to have power restored between 4-6 p.m.

Police are monitoring traffic at at least one intersection where traffic lights have gone dark, according to scanner traffic. (Update at 3:10 p.m. — A generator is being used to run the traffic signals at Arlington Blvd and Henderson Road.)

Update: generators in place, providing temp power. RT @ArlingtonDES Traffic signal at Henderson Rd @ Rt 50 is temp out due to a power outage