Clarendon filmmaker Mike Kravinsky is back with a new movie.

“Geographically Desirable” tells the story of Nicole, a TV news reporter whose life is turned upside down after she inherits a house in a small town and a dog from her recently deceased uncle. As she gets to know the town and its inhabitants, Nicole has to decide between the big city and small town lives. 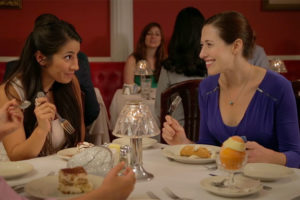 “She gets to experience something other than the life of news. She lives and breathes this stuff,” Kravinsky said.

While Nicole will have to decide between the two lives, audiences members may not know which one she chooses. Kravinsky purposely chose to have an open ending for the movie.

“My thoughts were both lifestyles are good as long as there is balance,” he said.

Kravinsky is no stranger to the late nights that come with TV news. An editor with ABC News for 29 years, it would be fair to say that he lived and breathed the “life of news.” He decided to take a buyout in 2010 and turned to filmmaking. He released a web video-series in 2011 about a middle-aged man deciding what to do after being fired.

“This is sort of my second career,” he said.

While Kravinsky’s ABC career taught him how to use different camera equipment, he said creating and editing a film was completely different.

Changing from a facts-only news mindset to a more creative one was also a challenge, he said. In news, reporters are telling someone else’s story, but when it comes to filmmaking, the creators have a chance to tell their own, he added.

“With writing fiction, every character is you in some way,” he said. “And every character’s experience comes from your own. It’s nice in a way because the story is some version of you and how you see life. I guess that’s the best way to describe it.” 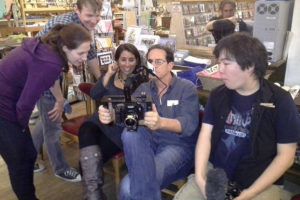 With “Geographically Desirable,” Kravinsky said that many of Nicole’s challenges working the late night shift came from his own experiences. At one point he was working from 1-9 a.m. as an editor on “Good Morning, America.”

Arlington County was very supportive of the film, Kravinsky said. The movie uses Floyd, Virginia for its small town, and filmed its big city scenes in Arlington, including at the old Tutto Bene Restaurant, Bluemont Park, two different Arlington residences and on an ART bus. 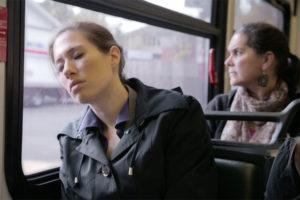 Getting to use the ART bus was one of the more unusual experiences in filming “Geographically Desirable,” he said. The film cast and crew loaded on the bus and drove back and forth from Virginia Square, using some of the larger roads in Arlington. The bus was also useful, as Kravinsky said he ended up using the bus to drop extras off at their homes.

“It is really simple. The driver was like where do you want to go, and I was just like up and down Wilson [Blvd], up and down Fairfax [Drive],” he said. “As long as we kept moving.”

“Geographically Desirable” is now available on Video on Demand with cable networks like Verizon, as well as on digital video services like iTunes and Amazon Instant Video.