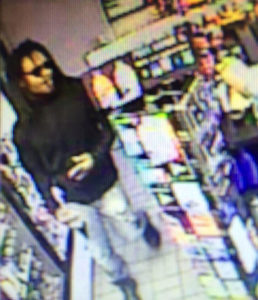 (Updated at 2 p.m.) Arlington County Police have swarmed the area around Ballston in search of two armed robbery suspects.

The Sunoco gas station at the corner of N. Glebe Road and Washington Blvd was robbed earlier this afternoon by two suspects, one of whom has a gun, according to police.

While police try to track down the suspects, nearby Washington-Lee High School has been placed in “secure the school” mode, which usually means that exterior doors are locked and students are not allowed outside.

Around 2 p.m., police released a surveillance image of a robbery suspect, taken inside the Sunoco’s convenience store.