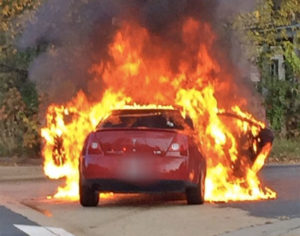 No one was injured after a car burst into flames in the Barcroft neighborhood this morning.

The incident happened around 8 a.m., at the intersection of S. Buchanan Street and 9th Street S.

Police say they responded to a report of a smoldering car at the intersection. The smoldering quickly turned into flames, as captured in a photo taken by a police officer.

Arlington firefighters responded to extinguish the blaze. A county fire marshal also responded, to investigate the cause of the fire.