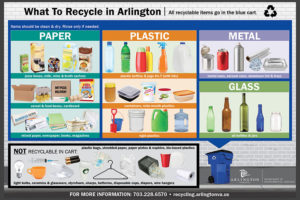 Keep the plastic bags out of your recycling bins.

That’s the message from Arlington County, which is no longer accepting plastic bags as part of their curbside recycling program. Instead, those wishing to get rid of grocery bags need to take them back to grocery stores, which can recycle them.

Plastic bags can be difficult to recycle because of their flimsy nature, McMahon said.

“Plastic bags tend to get stuck and cause damage to the recycling facility machines,” she said. “Recycling companies can spend hours shutting down machinery and pulling out the bags.”

“Combine bags with other bags or place liners or plastic film inside other plastic bags,” the county said on its website. “Many Arlington retail stores such as Whole Foods, Costco, Safeway, Harris Teeter and Giant collect and recycle plastic bags. Look for the specially marked containers when you are out in the County. Or, reuse your bags during your next visit to store.”

Arlington will still recycle paper bags, like those from Whole Foods.

The recycling change came as a surprise to some residents.

Marianne Petrino-Schaad, a Douglas Park resident, said the county did not send out a letter informing residents about the changes.

‘The only way we seemed to be notified of this was a little magnet stuck in the trash pickup,” Petrino-Schaad said. The magnet, pictured above, notes items that should not be recycled in addition to those that should. Previously, the county advised residents to recycle bags by placing multiple plastic bags in one bag.

While taking the plastic bags to a grocery store is not too much of a hassle, she said she was frustrated that residents pay for recycling services and now they aren’t taking items like plastic bags, wire coat hangers and shredded newspaper.

“To my mind it’s an example of what I call, and other people, call shadow work,” she said.