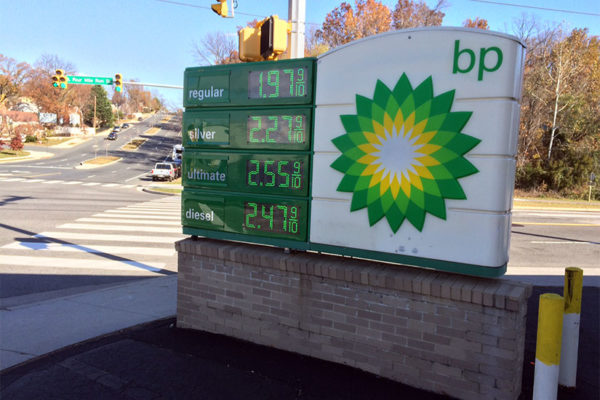 Cheap Gas in Arlington — Just in time for your Thanksgiving vacation, there are a number of gas stations in Arlington at which you can fill up for less than $2.00 per gallon. At $1.97 per gallon, the BP station at the corner of S. Four Mile Run Drive and Walter Reed Drive, pictured above, isn’t the lowest in the county: that honor belongs to Arlington Auto Service on Columbia Pike, with its $1.87 per gallon gas. [Gas Buddy]

County Warns of Sewer Backup Risk — One thing that could ruin your Thanksgiving feast would be a sewer backup. Arlington County is warning residents that that could happen if they’re not careful about disposing of fats, oils and greases (FOG). The proper ways to dispose of FOG is to empty it into a container, like an empty can, and throw it in the trash — not rinsing it down the drain, where it could cling to and clog pipes. [Arlington County]

Suspicious Package Calls Up Since Paris Attacks — Calls for suspicious packages and suspicious circumstances are up in Arlington since the Paris terror attacks. That’s according to Arlington County Police Chief Jay Farr, who spoke to reporter Pete Williams during a segment on last night’s NBC Nightly News broadcast. The county has set up an online form for reporting possible terrorism-related activity, in addition to receiving such calls via the police non-emergency line: 703-558-2222.

Airport Workers Rally for Higher Wages — As hordes of passengers head to Reagan National Airport for holiday travel, airport workers are going on a hunger strike, pushing for a living wage. Tipped workers at the airport, like baggage handlers and wheelchair attendants, make as little as $3.77 an hour. [WUSA 9]

Lopez Named House Minority Whip — Arlington’s Del. Alfonso Lopez has been named the new Minority Whip of the Virginia House of Delegates Democratic Caucus. In a statement, Lopez said we will continue to work for “our vision of a Commonwealth that prioritizes public education, invests in transit and transportation infrastructure, protects our environment, preserves our social safety net, and grows a new Virginia economy to expand opportunity for all Virginians.” [Patch]

Van Doren Running for Reelection — Arlington School Board member Nancy Van Doren has announced that she will be running for reelection in 2016. Van Doren replaced Noah Simon on the School Board after a special election last year. She will be seeking her first full term. [InsideNova]