Editor’s Note: Sponsored by Monday Properties and written by ARLnow.com, Startup Monday is a weekly column that profiles Arlington-based startups and their founders, plus other local technology happenings. The Ground Floor, Monday’s office space for young companies in Rosslyn, is a Metro-accessible space featuring a 5,000-square-foot common area that includes a kitchen, lounge area, collaborative meeting spaces and a stage for formal presentations.

When Christopher Doorley was looking for a content management system (CMS) to help build a mobile application for a large membership-based client, he couldn’t find anything that fit the bill.

So, like any innovative entrepreneur, he decided to build one in-house.

The original client — a large union — liked it, and soon others were asking for something similar, including firms and nonprofits that were much smaller than those of the unions. “They said they loved what we did for the [bigger firms] and asked if we could do it for them,” Doorley says. 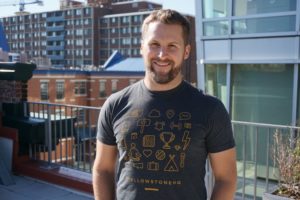 After adapting the subscription-based platform to accommodate cost-effectiveness scales, the CMS has proven to be so successful with only word-of-mouth marketing that Doorley, CEO and co-founder, has spun it off into its own business, Yellowstone Technologies. The platform, after development at Crystal City’s 1776, is ready for launch this week.

Yellowstone — the work-in-progress codename for the project eventually stuck — answers a vast number of needs for membership-based organizations, of which there are many. Nonprofits, churches, sports groups, clubs, Scout troops and the like with dozens or hundreds of members have the same needs as Yellowstone’s other target clients: international and national organizations with hundreds of thousands of members.

“The goal is to make it cost effective and affordable to all of them,” Doorley says. “We don’t want to have to differentiate between a running club with 25 people and a local diocese that has a couple of dozen chapters and tens of thousands of members.”

Yellowstone helps organize and disseminate the valuable communications an organization requires to keep everyone — or segmented fractions of everyone — in the loop and on the same page. It also frictionlessly interfaces with existing products, such as Google Groups, iCal and various tools used by nonprofits.

Even existing blog posts, photos, calendars, newsletters and other materials are sent to mobile devices in a readable format.

A church is a good example, and Yellowstone is conducting trials with Arlington churches. One communications director, Doorley says, complained that no one was reading the church newsletter, the main organ for communicating to the congregation. “She sees [Yellowstone] as a replacement for their newsletter,” Doorley says. “They hope to make it useful and get it to where people are.”

One area union is already using Yellowstone, and even in the beta testing stage it’s a hit.

“This application is probably the most essential thing we need in communicating,” says Korey Hines, the secretary and treasurer of the Annandale-based Communications Workers of America Local 2222.

Hines noticed that the national CWA was using a nifty mobile application — Yellowstone, as it turns out — and asked for a version for his own chapter. “I liked the layout and the fact they customized it for our mission,” he says. “They weren’t just giving us a product and walking away.”

With nearly 800 members and a fading interest in emailed information, Hines enlisted Yellowstone Technologies to develop a way to communicate vital information, but to “filter it down to just the groups that need the information at that time.”

It works, and Hines is happy with the results.

Funding for Yellowstone Technologies is a combination of “bootstrap, client services and equity,” Doorley says. “We have talked to a few people about fundraising but not actively pursued it yet.”

This isn’t Doorley’s first foray into the startup world. In fact, one of his endeavors is still going strong although he’s relinquished many of his duties: United Karaoke. United Karaoke is a national chain of team-based karaoke leagues — yes, competitive karaoke.

Wait, aren’t those teams considered membership-based organizations? Is that an opportunity for Yellowstone?

“Actually,” Doorley says, “we’ve discussed that. It’s a membership-based organization I would love have using Yellowstone.”