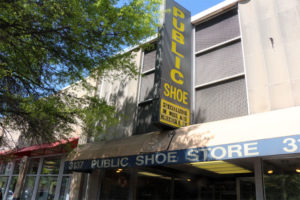 Update at 4:35 p.m. — Public Shoe Store is still open, says owner S.H. “Doc” Friedman’s daughter. “Public Shoe is still operating and will continue to do so for another few months,” Karen Friedman Widmayer said this afternoon. In April, Friedman told ARLnow.com that the store would close by the end of the summer.

A new 7-Eleven store is coming to the heart of the Clarendon business district.

Permits have been filed for a 7-Eleven at 3137 Wilson Blvd, the former Public Shoe Store, which  is preparing to close after 78 years in business.

So far, it’s early in the permitting process and there’s no word as to when the store might open.

This will be the sixth 7-Eleven store within a half mile or so. The nearest store is a couple of blocks away, at 3000 Washington Blvd. Another is located at 2704 Washington Blvd, and three are clustered around the Virginia Square Metro station.