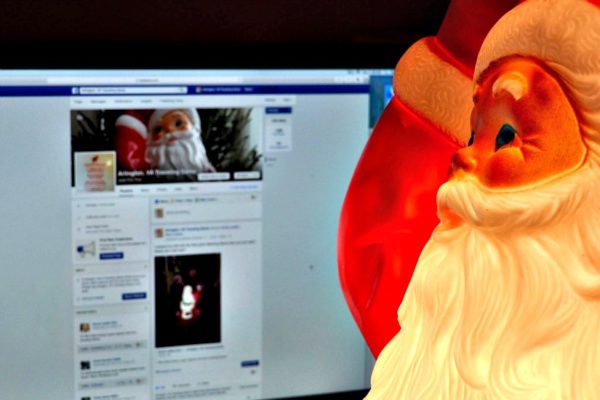 A short, plastic visitor with blue eyes, a red suit and a long white beard has been popping up on porches around the county.

The Arlington, VA Traveling Santa began his journey shortly after Thanksgiving. Since then, he’s been visiting families throughout the county, showing up on their doorsteps unannounced. Similar to a holiday chain letter, Santa is trying to make as many stops as he can before Christmas Day.

There are rules when Santa visits, but they’re simple: he can only stay at a house one night before he must move on to visit someone else. His next destination is chosen by whomever hosted him the previous night.

Santa’s hosts are encouraged to take photos of his visit before posting them to the Facebook page where his travels are being tracked.

While most hosts opted for classic pose-and-smile photos, others have really taken him in by engaging in activities like brushing his teeth or taking him for a ride.

However, Traveling Santa isn’t just something fun for the holidays. The coordinators of the campaign — who couldn’t be reached for comment — are also asking those who interact with Santa to donate to the Arlington Food Assistance Center.

A representative for AFAC confirmed the organizers created a personal fundraising page for the cause. On Facebook, they’ve pledged to donate $1 for every “like” the page gets by Christmas — the count was nearing 200 Wednesday morning — and have agreed to match all donations made via the page.