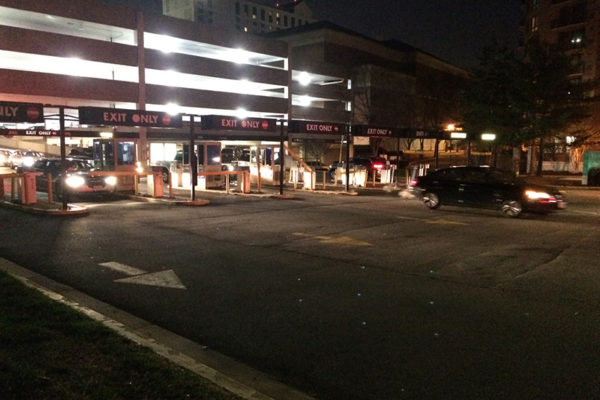 (Updated at 11:55 p.m.) Two suspects are in custody after leading Arlington County Police on a vehicle pursuit through the District of Columbia, following a shooting near the Pentagon City mall.

The alleged road rage incident happened around 3:10 p.m., at the 15th Street South exit of the mall’s parking lot. NBC 4 reported that a driver was having trouble using a credit card to exit from one of the gates. The driver was trying to get the car behind to let them reverse out, when someone in that car fired a gunshot in the air.

Witnesses called 911 and reported the shooting, describing the suspect vehicle as white in color with D.C. tags

A car matching the description given to police was spotted by an officer on I-395. That led to a pursuit across the 14th Street Bridge into D.C., near the National Mall, and back on I-395 before ending at 3rd and F Streets NW, near the Third Street Tunnel, where the suspects bailed out and took off running.

Arlington police, aided by D.C. police, were able to chase and apprehend both suspects, according to ACPD spokesman Lt. Kip Malcolm.

The suspects threw a gun out of the window during the vehicle pursuit, Malcolm said. It was recovered along I-395 near the GW Parkway.

Arlington County Police normally don’t engage in car chases, but department policy specifies that such pursuits are authorized for violent crimes involving firearms, “for the safety of the community,” according to Malcolm.

No one was reported injured in the shooting. As of early Friday evening, investigators were still looking for bullet casings and other evidence near the scene. They’re also trying to find other witnesses as well as the other driver involved, who fled after the shooting.

“The investigation is ongoing,” Malcolm said.