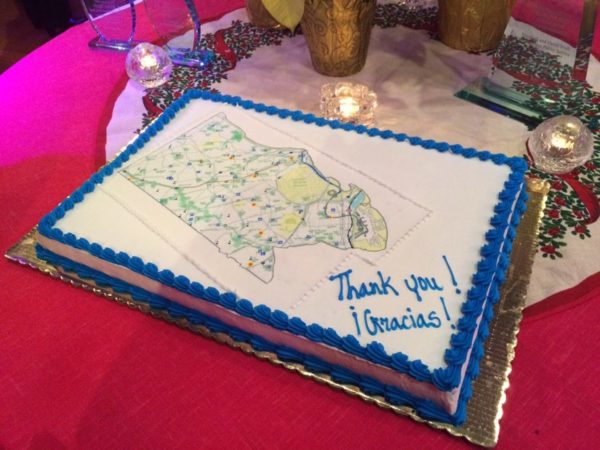 The weekend is here. And it’s freezing.

The good news, for those who don’t need the Hollywood vision of a white Christmas to make the holiday merry, is that warmth will be returning. Forecasters say a record high temperature of 72 degrees is possible on Christmas Eve.

So think warm thoughts this weekend while you’re wrapping up your holiday shopping, heading to see the new Star Wars movie or out getting an early start on your New Years exercise resolutions.

Also, while we’re at it, we wanted to wish a happy retirement to County Board members Mary Hynes and Walter Tejada. A goodbye party was held for Hynes and Tejada at The Salsa Room on Columbia Pike Thursday. A large crowd was on hand to honor their service to Arlington County.

Agree or disagree with their policies, those who serve on the County Board are dedicated public servants. Board members get paid a part-time salary for what it in actuality a full-time job. And they often have to endure blistering criticism and derision from those they’re trying to serve, all with a smiling face.

This isn’t to say Board members and their policies shouldn’t be immune to criticism from citizens — it’s the interplay between opposing viewpoints that helps make our democracy work. And as the online news outlet of record in Arlington, we do our best to bring the sunlight of public attention to local government actions.

But some seem to mistake policy disagreements with bad intentions, treating local elected officials as if they’re out to “get” them rather than seeing them simply as a fellow resident who’s doing what they think needs to be done to make our community better. Don’t be that guy. Disagree without assuming nefarious intentions.

Let’s face it, in Arlington our local elected officials are Boy Scouts compared to the pols elsewhere in our great country. If anything they may be too concerned with public opinion and the local squeaky wheels, even if the squeaky wheels don’t have the self-awareness to recognize it when they don’t get their exact way.

Feel free to discuss Mary Hynes and Walter Tejada’s record on the County Board, or any issues of local interest in the comments.