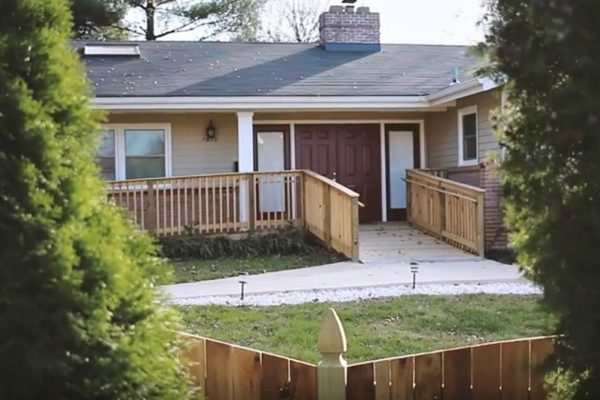 Four Arlington residents with intellectual disabilities are back home in the county, thanks to a new group home just off Arlington Ridge Road.

The house is being operated by Good Neighbor Community Services, an organization that specializes in helping those with behavioral health issues and intellectual disabilities achieve “a life of opportunity, independence, and growth.”

It will be a special Christmas for four Arlington residents who for years have missed celebrating at home in the County.

The four adults, all with intellectual disabilities, require constant care. Until this past fall, they were living outside Arlington in one of five large state institutions known as training centers.

This Christmas, they will celebrate with family and staff in their new group home, opened by the County last month off Arlington Ridge Road.

The County chose contractor Good Neighbor Homes to operate the house, which has a private bedroom for each resident.

“We are thrilled to be able to bring these residents back to Arlington, and to give them the care they need in homes in our neighborhoods,” said Anita Friedman, director of Human Services for the County. “We believe this solution is better for them, for their families and for our community.”

Long-time Arlington resident Nancy Tishman’s son David, 38, who is severely autistic, is one of the new residents of the Arlington group home. He lived with his family until a severe medical crisis sent him to the regional Northern Virginia Training Center in Fairfax, where he stayed for 10 years.

Tishman credits Arlington County “for bringing him back home. His brother and sister and his dad and I are so grateful and filled with joy.”

The long path to opening the group home began in 2012. That was when the Commonwealth reached an agreement with the U.S. Justice Department requiring Virginia to move people with disabilities out of the regional centers and back into their own communities.

The settlement provided Arlington with $1.5 million to ensure the transitions.

The Justice Department case was based on a 1999 U.S. Supreme Court decision that said “confinement in an institution severely diminishes the everyday life activities of individuals.”

A fifth and last member of the household near Arlington Ridge will move in next month. Another group residence for five, specifically built with funds from the settlement, will open in January near Clarendon.

The holiday homecoming is the “perfect” ending to a long process aimed at creating a familiar environment of care and dignity, marvels La Voyce Reid of the County’s Developmental Disability Services Bureau.

“This is the kind of true gift we hope for this time of year,” she said.