I received a lot of questions about the interest rate increase by the Fed last week, so I turned to a mortgage expert, Troy Toureau (NMLS ID #5618) of McLean Mortgage Corporation, to guest-author this week’s column. Thanks Troy!

Question: I am planning to purchase a home early next year, yet I saw that the Federal Reserve Board (Fed) just raised interest rates. Will I still be able to get a good rate when I am ready to make an offer?

Answer: Barring unforeseen circumstances, the answer is absolutely yes. There are several reasons rates will remain attractive in the near future:

1. We are still dealing with historical lows

One must remember that the Fed is raising rates from record low levels. As a matter of fact, rates have been below five percent for only the past five years. For the 30 years before that, they averaged over seven percent. According to Freddie Mac’s chief economist Sean Becketti, “mortgage rates will tick higher but remain at historically low levels in 2016.”

2. The Fed rate and mortgage rates are not directly correlated

Even if the Fed continues to raise rates, they are raising short-term rates. Mortgage rates are based on long-term rates. You can see from the chart below that the last time the Fed raised rates significantly, from February 2004 to June 2006, mortgage rates stayed relatively flat. 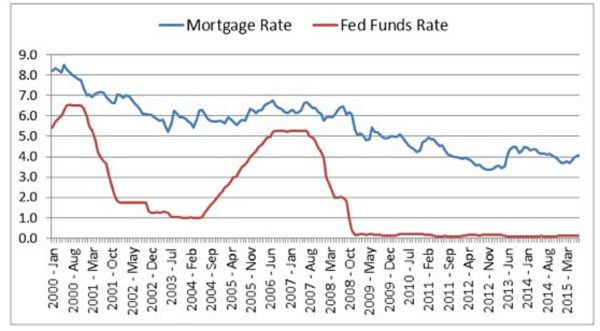 Here is an excerpt from the statement released after their meeting: “The committee expects that economic conditions will evolve in a manner that will warrant only gradual increases in the federal funds rate; the funds rate is likely to remain, for some time, below levels that are expected to prevail in the longer run.”

Becketti states, “we take the Fed at its word that monetary tightening in 2016 will be gradual, and we expect only a modest increase in longer-term rates.”

Chief economist for the National Association of Realtors Lawrence Yun agrees. Yun indicated that an uptick in short-term rates shouldn’t have a big effect on those looking to borrow in 2016. With rates going up by such a small amount, the Fed’s move could serve as a stimulant to the economy.

That being said, the Fed’s action to raise rates could be the beginning of the end of the easy monetary policy we have enjoyed for the past several years. So even if rates do not go up significantly next year, it would behoove you to purchase sooner rather than later. Basically, we have had a sale on money going on and sales do not last forever.

If you’d like more information about interest rates or mortgage products, Troy can be reached on his cell at 301-440-4261, by email at [email protected], or via his website www.AnyHomeLoans.com.

If you’d like a question answered in my weekly column, please send me an email at [email protected]. To quickly read any of my older posts, visit the blog section of my website at http://www.RealtyDCMetro.com.