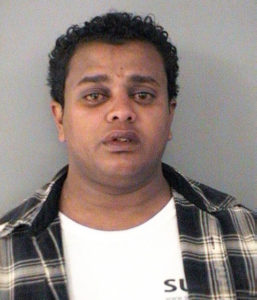 A 30-year-old man arrested for sexual battery and public drunkenness on Columbia Pike Monday has been arrested for being drunk in public at least 19 times since July 2011.

Nahome Gebrekidan, of no fixed address, was arrested Monday afternoon on the western end of Columbia Pike in Arlington.

Police say a woman was walking down the street just before 4:00 p.m., when she passed a man later identified as Gebrekidan.

“After they passed one another, she felt a hand go between her legs, touching her genitals over her jeans,” said Arlington County Police spokeswoman Ashley Savage. “The suspect did not say anything to the victim and continued to walk westbound on Columbia Pike.”

Gebrekidan has been charged with sexual battery and being drunk in public. His next court date is scheduled for Feb. 5.

Court records show that Gebrekidan has been charged with being drunk in public 18 times in Fairfax County and Alexandria alone, over the past four and a half years. He has also faced minor charges like trespassing and disorderly conduct in those jurisdictions.