Earlier: Arlington County Police are on scene of a bank robbery at the Wells Fargo in Pentagon City, across from Costco. 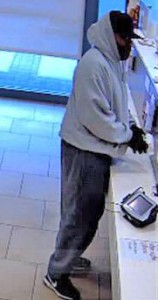 The incident happened just before 10:15 a.m., on the 1400 block of S. Fern Street. Initial reports suggest a man passed a note to the teller and fled with cash in his hand.

Police detained at least one possible suspect after arriving on scene. They also investigated a report of a man seen running through the nearby Residence Inn hotel. However, the latest report is that surveillance footage suggests the suspect fled in a vehicle immediately following the robbery.

The suspect is described as a 5’9″ black male, wearing a dark baseball cap, red scarf, a gray hoodie and baggy sweatpants.

Anyone with information on the robbery or the suspect is asked to call police at 703-558-2222.