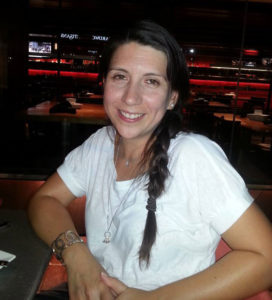 A first-generation immigrant from Guatemala, Talento and her husband, Gary, currently have two children in Washington-Lee High School.

From a fundraising page:

Tannia knows firsthand how important education is to ensuring children have the brightest future possible. That is why she is extremely involved in Arlington’s public schools. Tannia has served on the Math Citizens Advisory Committee, the ESOL/HILT Citizens Advisory Committee, the Superintendent’s Master Planning Working Group, and on the Advisory Council on Instruction as a Vice Chair. Some of her most recent work includes the Facilities Study Committee and serving on the Career Center Parent Advisory Committee. Now she is running for School Board to make sure all of Arlington’s students have a fair shot at a world class education.

Talento, a first-generation American, spoke before a large crowd of local Democratic activists tonight announcing her campaign to replace Emma Violand Sanchez, who is retiring at the end of 2016, on the School Board.

In her remarks, Talento explained her personal story, having had to help care for her family during high school, and make sure that her siblings were cared for when their mother became seriously ill. Talento had to drop out of high school to care for her family, later earning her high school diploma through an alternative program, and working her way up to become a legal secretary at one of the world’s largest corporate law firms.

Talento spoke about her drive to achieve educational success in the face of adversity and her desire to see every student reach graduation day without experiencing the adversity she faced.

“I believe that we can ensure that every one of our students will make it to graduation day educated to the highest standards and prepared for their future so that no student in Arlington has to live a version of my story,” Talento said.

Talento has lived in Arlington with her family for 12 years and has spent the last 5 years working her way through the school committees and commissions. From her time on those committees, she believes that Arlington Public Schools has the opportunity and the necessity to better advocate for children of all walks of life.

“As a School Board Member, I will advocate for every child to ensure that their needs are met and that they are prepared for life beyond high school,” Talento said.

Retiring School Board Member Dr. Emma Violand Sanchez introduced Tannia Talento before her remarks and highlighted Talento’s service to APS and its students.

“Her work in our schools has been towards the advancement of students of all walks of life, and ensuring that every one of our children has a shot at success in our schools and beyond,” Dr. Violand Sanchez said. “I believe Tannia’s vision is what we need in Arlington… I am proud to support her candidacy.”

Talento is running for the Democratic Endorsement, which will be determined through a “firehouse primary,” or open caucus. The caucus will be held on two dates, Thursday May 19th from 7pm to 9pm at Drew Model School and Saturday May 21st from 11am to 7pm at Washington-Lee High School.