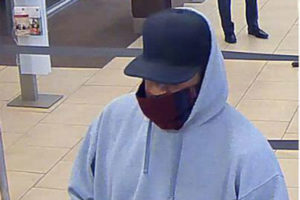 A man has been arrested and charged in connection with two recent bank robberies in Arlington.

Nathaniel Moone, 45, was taken into custody this past Friday evening by Metro Transit Police, at the Eastern Market Metro station in D.C.

Police say Moone was the man who tried to rob a Wells Fargo bank in Rosslyn on Dec. 30, but fled before receiving any money. He later successfully robbed the Wells Fargo across from Costco in Pentagon City this past Thursday, Jan. 7.

Moone was identified by detectives following the Jan. 7 robbery and arrested the next day.

The full press release from the Arlington County Police Department:

A bank robbery suspect was taken into custody by the Metro Transit Police Department. Nathaniel Howard Moone, 45, of no fixed address, was arrested during the evening of January 8, 2015 as he exited the Eastern Market Metro station.  Moone was charged with bank robbery and attempted bank robbery and is currently being held pending extradition.

At approximately 4:48 pm on December 30, 2015, the Arlington County Emergency Communications Center was alerted of an attempted bank robbery that had just taken place at the Wells Fargo, located in the 1300 block of N. Wilson Boulevard. The subject attempted to rob the bank by passing a note to the teller but became frustrated and fled the scene on foot.

At approximately 10:10 am on January 7, 2016, the Arlington County Emergency Communications Center was alerted of a bank robbery that had just taken place at the Wells Fargo, located in the 1400 block of S. Fern Street. The subjected entered the bank and handed a teller a note that demanded money. The teller gave the suspect an undisclosed amount of money and the subject fled on foot. The suspect remained at-large for a little over twenty-four hours.

“Our detectives were able to identify this suspect in a timely manner as a direct result of our outstanding relationship and the ability to share resources with our partners at Metro Transit Police Department,” comments Daniel J. Murray, Deputy Chief of Criminal Investigations Division for Arlington County Police Department.