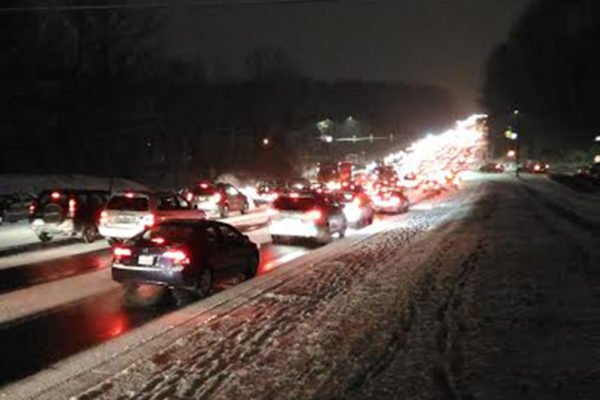 If this was a test run for this weekend’s snowstorm, we didn’t fare well.

Though a thin coating of snow fell across the Arlington area, many drivers found that roads were slick at best, treacherous at worst. Traffic piled up across the county as early as 7 p.m. this evening, and plenty of drivers told us they encountered unsalted, untreated roads.

“Skid fest on Rosslyn hill,” said one reader. “It seems Arlington failed to treat the roads for tonight and an ice layer built on the surface of the road, uphill Rosslyn.”

Another wrote us earlier tonight and said: “The ground is frozen solid.  The weather forecasts all predicted an inch or so of snow this evening.  Why weren’t the roads treated?”

Here’s a snippet of what some other ARLNow readers reported on Twitter throughout the night:

Road conditions in #Arlington are unacceptable! No salt, no sand anywhere. @ArlingtonVA @ARLnowDOTcom

this is what snow does to DC @capitalweather @ARLnowDOTcom pic.twitter.com/rcUc4e2rlr

Season’s first snow and I-66 near Courthouse has been a parking lot for hours. @ARLnowDOTcom @capitalweather pic.twitter.com/yp9GMD2jkP

.@ARLnowDOTcom Possibly the best way to sum up this evening? #snowmaggedon2016 pic.twitter.com/A6zW9hqygz

29 and Culpeper st. Cars being pushed one by one carefully down the hill toward George Mason @ARLnowDOTcom pic.twitter.com/KiWxCqqV6M

Did you drive through the ice and snow? We want to hear from you. Tweet at us or send us an e-mail.

END_OF_DOCUMENT_TOKEN_TO_BE_REPLACED

More Stories
Who Whacked the Trees on Washington Boulevard?APS Cancels School Due to Weather Concerns