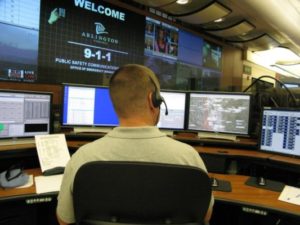 Arlington County and the City of Falls Church residents are getting closer to being able to text emergency messages to dispatchers at the 911 call center in Arlington.

County staff members are being trained this week on the long-awaited “text-to-911” capability and the service is nearly ready to go, said Office of Emergency Management spokesman John Crawford. “The only thing we’re missing is an exact launch date,” he said.

The technology was unveiled in 2010 during a press conference with then-FCC Chairman Julius Genachowski and county officials. Refining the technology and coordinating implementation with other regional emergency systems delayed the launch.

Callers to 911 will be able to text SMS messages if their mobile phone carrier and their data plans allow SMS texting. Older phones, particularly the “flip” phone variety, most likely will not work with the system. Photo and video transmission capability will be launched later.

Even after the texting option is available, OEM still prefers old-fashioned phone calls. “The motto we’re using is, Call if you can, text if you can’t,” said Crawford.

Texting in emergencies is useful for those who are deaf and hard of hearing, unable to speak in an emergency or in a situation where calling is unsafe, such as an “active shooter” scenario.