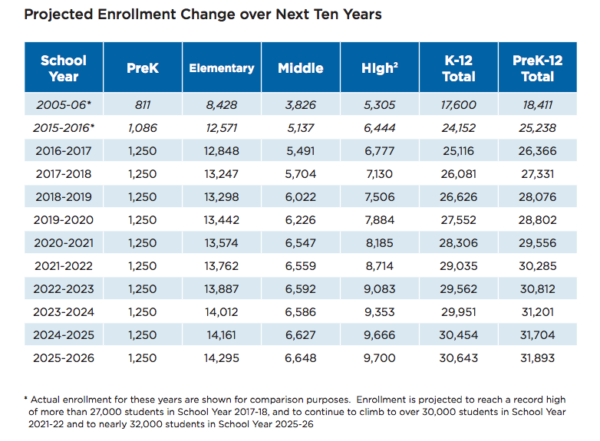 The number of PreK-12 students enrolled in Arlington Public Schools is expected to surpass 30,000 in 2022 after steadily rising for years, according to APS in its newly released enrollment report.

According to APS, the total number of enrolled students “has risen at an unprecedented high growth pattern since 2008.” Since fall 2005, the number of students has grown by more than 6,800 students, an increase of about 37 percent.

Growth will likely slow to 1.7 percent by 2023 and continue to wane thereafter, APS adds. By 2026, the school’s student body is projected to grow only by 0.6 percent and reach an enrollment total of 32,807.

Overall, the school expects to add nearly 7,600 students between now and 2026. 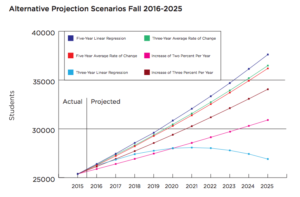 Among the factors used to project school enrollment was historic birth rates in Arlington County, which are used to project the number of future incoming kindergarten students. 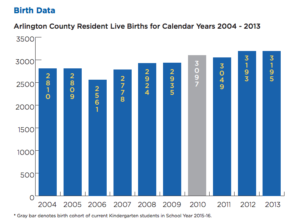 An average of 2,800 live births per year were recorded in Arlington between 2004 to 2008. Between 2009 and 2013, a period APS refers to as “the wave,” about 3,100 births on average were recorded each year. As children born during “the wave” grow up, they’re expected to crowd schools as they advance through elementary, middle and high school.

In response, APS has in the past undertaken several actions to mitigate school crowding, like hiring 387 new teachers last summer and utilizing trailer classrooms.

Among the steps being taken by APS to add more capacity for the growing student body are adding an elementary school at the Thomas Jefferson Middle School site, expanding Abingdon Elementary in Fairlington and building the new Stratford Middle School while moving the H-B Woodlawn Secondary Program to Rosslyn.

Read more →
More Stories
Where Can You Watch the Super Bowl in Arlington?Photos: 2016 Crystal Couture Fashion Show in Crystal City