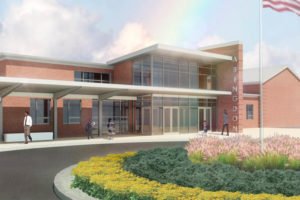 Abingdon Elementary School in Fairlington will be undergoing a renovation and adding a 30,000 square-foot expansion, after receiving unanimous County Board approval for a use permit on Monday.

The addition includes 12 classrooms, as well as a new gymnasium, entrance plaza and outdoor instructional area. With this, the total building capacity will be brought from 589 to 725 students. The school’s enrollment is currently 630 students, with some of the excess student population served by four classroom trailers, according to a press release.

There will be a new bus loop and changes to the site’s existing parking configuration. The Board approved also approved a use permit that will allow school staff to park at the nearby Farlington Villages Community Center.

“This expansion breathes new life into an elementary school that opened its doors in Fairlington in 1950,” said Arlington County Board Chair Mary Hynes. “Back then, Abingdon helped relieve overcrowding at Fairlington Elementary. Now, so many decades later, we are partnering with Arlington Public Schools to expand Abingdon to once again serve burgeoning enrollment in this part of the County. There has been robust community conversation about this latest expansion of Abingdon. When completed in 2017, it will serve the community well for years to come.”

The school’s expansion comes as part of the School Board’s FY2015-FY 2024 Capital Improvement Plan, which was adopted in 2014. The plan includes funding for over 1,000 elementary school seats, including the 136 seats that will be added at Abingdon, as well as others at McKinley Elementary School, and a new elementary school to be determined in South Arlington by FY 2019, in order to accommodate increased enrollment.

Abingdon Elementary was completed in 1950 and expanded in 1964, 1970 and 1990. The public review for the addition has taken place over the last 11 months, and included review by the Public Facilities Review Committee (PFRC), Environmental and Energy Conservation Commission (E2C2), Transportation Commission, and Planning Commission.

Not all neighbors support the plan, however. Some have expressed concerns about the loss of trees and potential for noisy construction traffic as a result of the project.

Arlington’s PreK-12 student population has risen by more than 3,000 since the start of school in 2013. At the beginning of this school year, APS counted 25,307 enrolled students.

END_OF_DOCUMENT_TOKEN_TO_BE_REPLACED

More Stories
Ask Will: How Do I Choose a Title Company?County Wants Feedback Before Starting Year-Round Yard Waste Collection